We specialise on blanket conversion

Comprehensive encoding of blanket material, including sub-products and manufacturing process details, enabled to build an extensive database making it possible to achieve a truly professional standard in blanket format conversion.

At the beginning all blankets look alike!
However, only after noting the differences real blanket study starts, relating design to performance.
More Info

just give us a call

Your business is too important to rely on any company.

We convert printers blankets rolls into formats for web and sheetfed offset presses.
We make qualification tests of every new blanket model from our suppliers at the in-house laboratory.

Handy blanket thickness readings taken at production, are made within 0,005 mm accuracy.
Shore A test affords just a general blanket hardness indication while the µ-hardness test gives a more approximate indication of the blanket press behaviour.
Bar fitting quality onto the blanket is checked with the bar pull strength test.

Material evaluation, production and after sales reports are carefully archived building an invaluable data base for the challenges ahead.

I wish other problems were also solved with a programmed annual order.

It is amazing how eight years have elapsed since your blankets were qualified with us.

Insist on professional blankets.
Get acquainted with surprise-free second runs.

Share with us your doubts and unsolved printing issues.
Take advantage of our blanket expertise.

Regardless of the undeniable progress of the blanket industry, some aspects of blanket response have stubbornly remained unpredictable, specially when it comes to controlling rubber rebound and blanket feed properties.
It is widely acknowledged how recurrent design attempts to overcome blanket response unpredictability have had its intended goal not confirmed by field results.

The persistent study and research carried in our laboratory, required to satisfy our standards of Blanket Conversion, Commercial Advise and After Sales Service, was rewarded at last:
A significant segment of blankets response has an oscillatory nature.
Due to the very peculiar rubber characteristics, blankets have an innate and most disturbing aptitude to respond resonantly to a wide range of oscillatory stimuli frequencies.
Those stimuli are typically external, such as press vibration and the cyclic bump preceding every new copy and may generate a resonant reaction in one or more of the blanket layers…
Go to News to keep on reading.
For further details please contact forum@printersblankets.com.

Spring versus Dashpot: So apparently similar Balls with so completely different reactions.

The Happy Ball jumps several times, as it would be normally expected from elastic rubber.

The Unhappy Ball reaches the floor with an even slightly higher Kinetic Energy.

Even so, it does not gather enough free Potential Energy to jump and initiate an oscillatory movement. 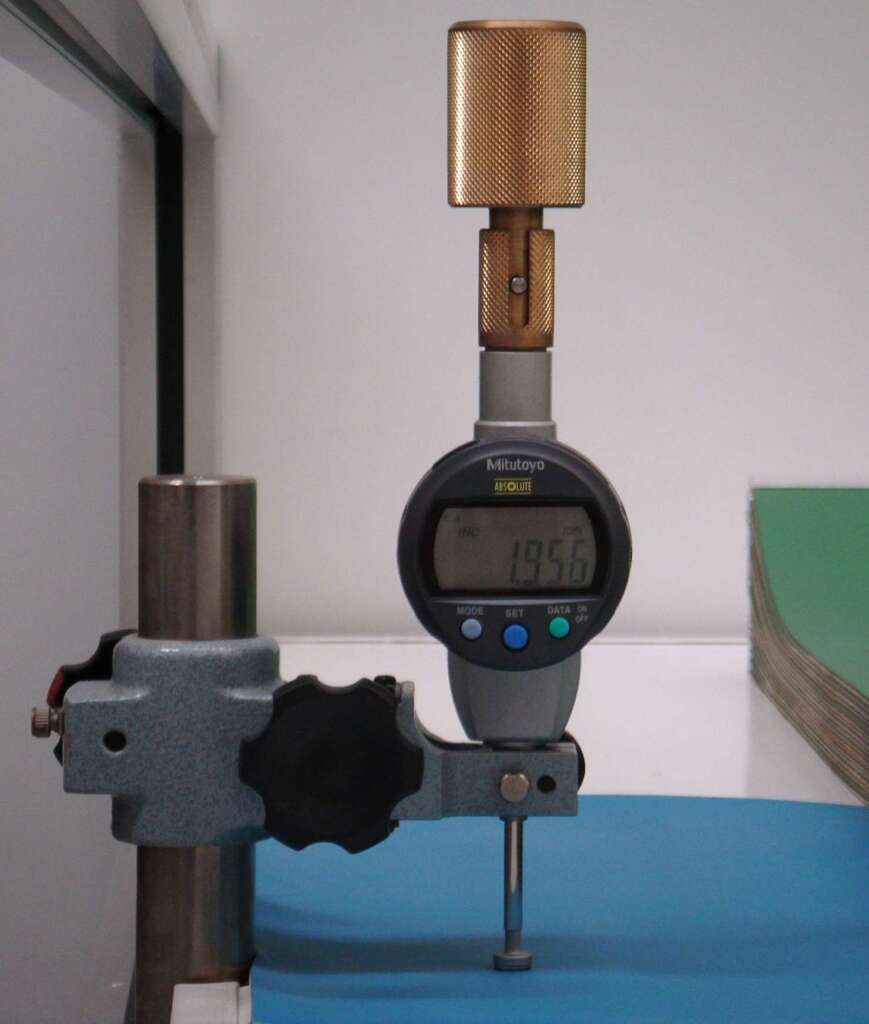 Constructive – Destructive Interference: The resultant of two oscillatory movements is the vectorial addition of the two oscillations.

Let us assume graph 1 is the Applied Oscillation and graph 2 is the Reaction Oscillation. Graph 3 is the resultant.

The above figures – left and right – show two extreme cases when the oscillations are in step (phase) or in counter-phase.

The phase angle between Applied and Reaction Oscillations results from the Response Delay Time and Response Frequency.

If Applied and Reaction Oscillation Frequencies are different Resultant Curve is distorted (no longer sinusoidal).

System Damping Degrees: Conditions the number of cycles that an oscillatory system, not connected to an oscillation source, is able to complete. 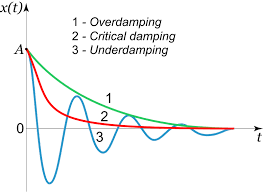 Curve 3 shows the reaction of a lightly damped oscillatory system to an excitation pulse. It will complete a few oscillation cycles through its equilibrium point before it comes to rest.

Curve 2 describes an oscillatory system that, once excited, returns to its resting position as quickly as possible, without completing any oscillation cycle, typical of a critically damped system.

Curve 1 depicts the behaviour of a heavily damped oscillatory system. Once excited it returns to its resting position more slowly than a critically damped system. A higher damping degree will mean an increasingly slower return to rest. 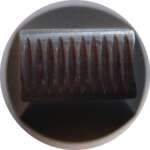 Even a low energy transfer is enough to efficiently melt continuous glue lines.

Specific End-Use Horns: Horn design varies, not only with its End-Use, but also with its Service Frequency.
Speed of propagation equals the Frequency times the Wavelength.
Speed varies with the propagation media. 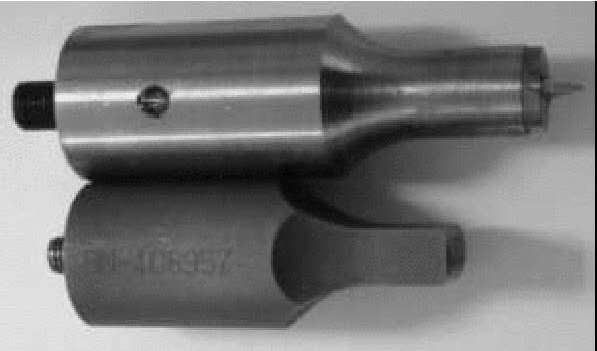 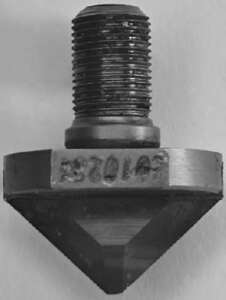 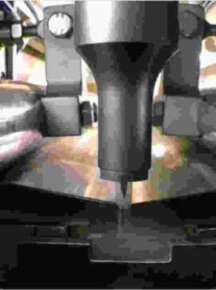 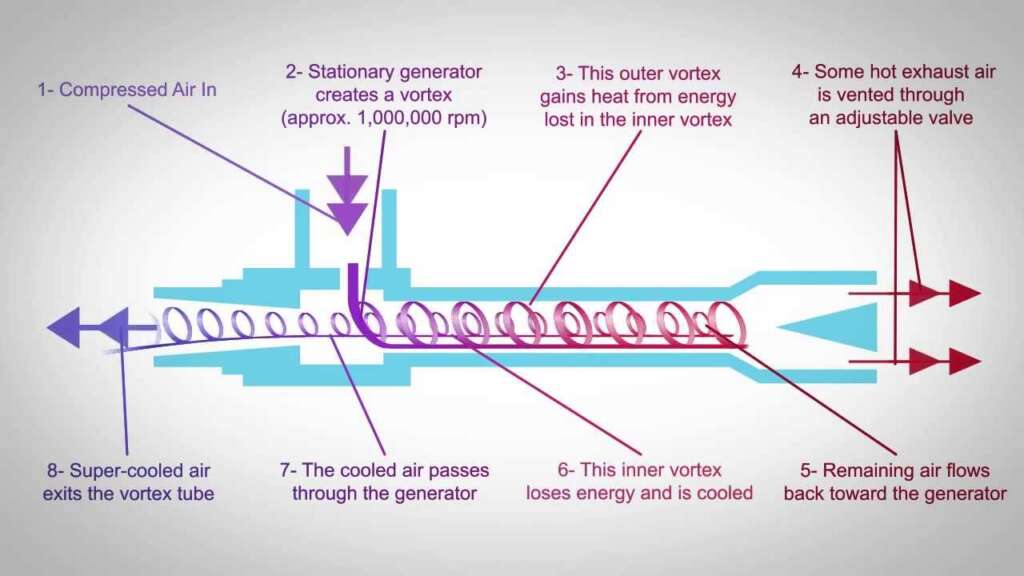 Quality Factor Q – The Ratio between the peak of reactive energy stored by the system and the energy dissipated during each cycle of oscillation defines Q.
With the oscillatory source disconnected, in a low Q factor System, oscillation amplitude will dampen and die out rapidly. 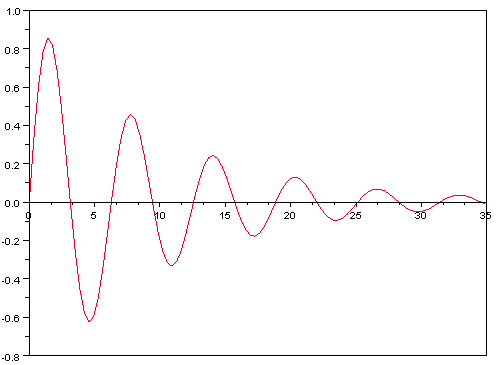 Too high a load for the available Oscillatory Power or geometrical changes will lower System Q factor.

Horn shape variety enables to apply the ideal unit according to its end use application and particular load geometry. 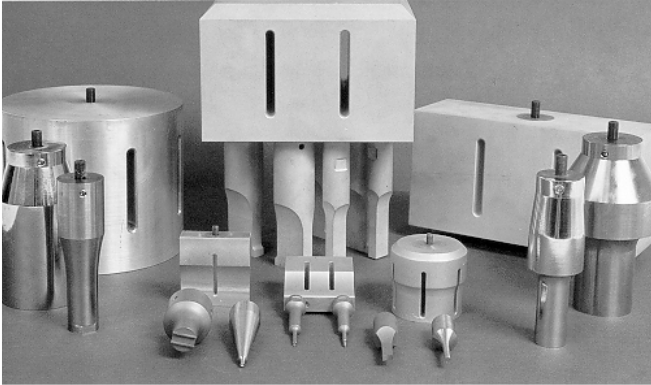 As the name suggests, Horn design includes often an amplification factor, increasing vibration amplitude delivered to the load.
Ultrasound applications range from industrial welding and cutting, or cleaning, to medical and nano technology.

Ultrasound Boosters, as the name suggests, act like Resonance Boxes. They decisively contribute to improve the Quality Factor, Q, of the oscillatory system. 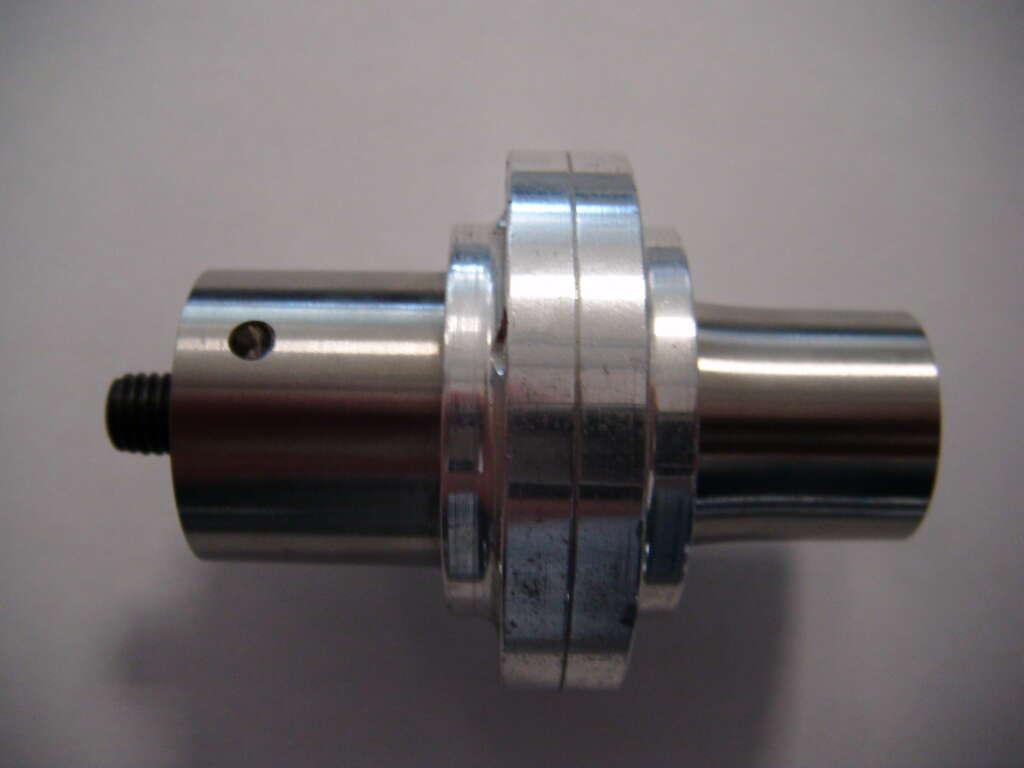 The left and right sides are not symmetric. When the Converter connects to the left side, the output vibration amplitude doubles. 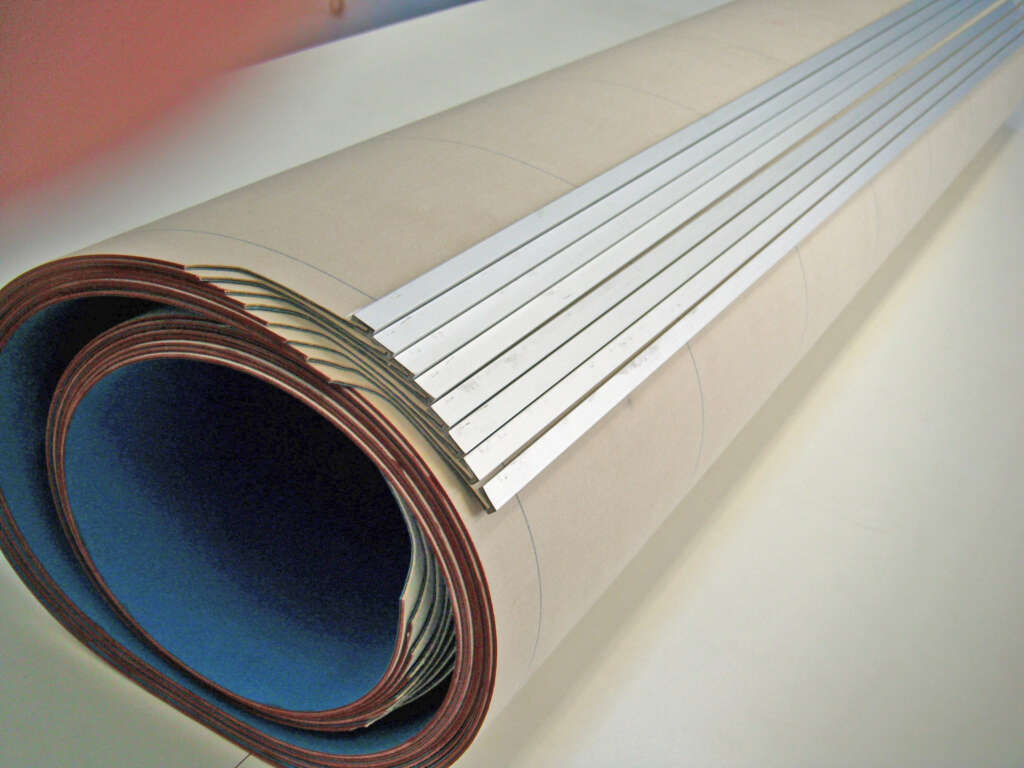 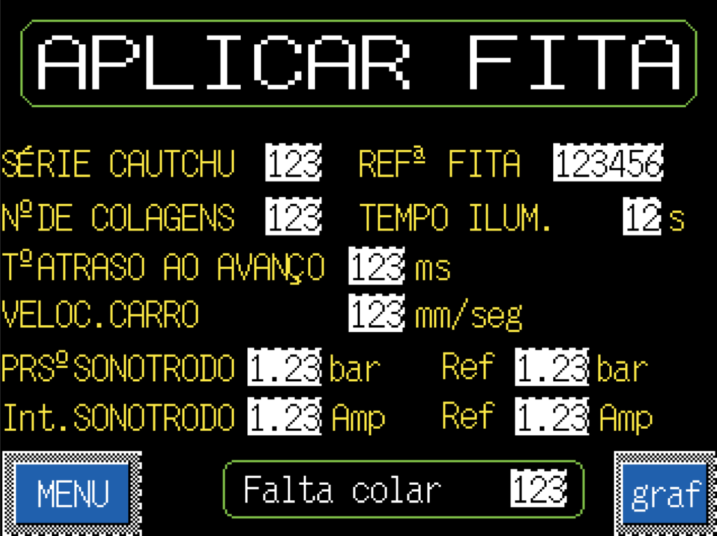 Control Panel enables prompt management of 11 glue operation parameters, of which we highlight:

Other variables are digitally programmable directly on the data base. 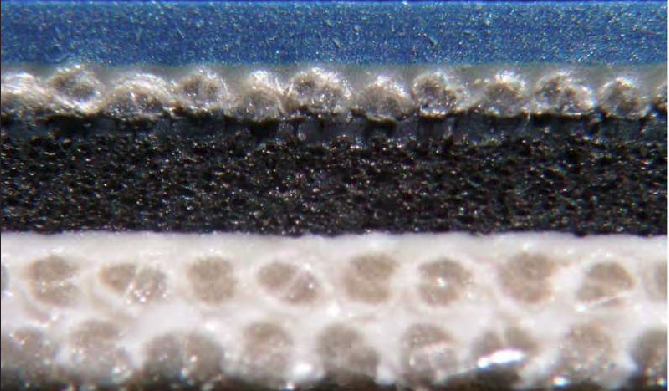 Ambient Moisture during Blanket storage and use, Ink and blanket Washes subject blanket surfaces and edges to degradation. 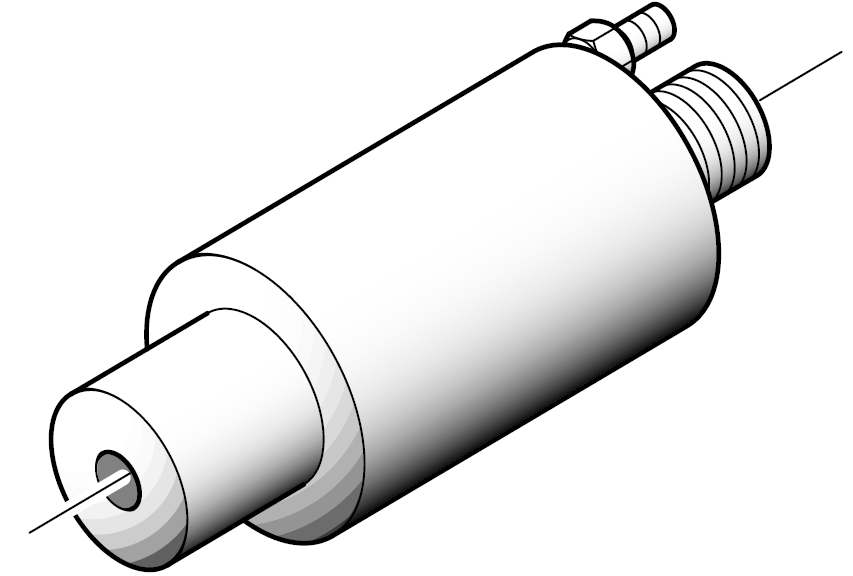 In a somewhat similar way to a resonant helical spring, the Converter Stack is subject to axial length variations.
Excited by the Generator’s output, the Converter enters also into a resonant vibration condition, being subject to minute length variations.
Except for the reaction delay, its response is in step with the electric oscillator’s frequency. 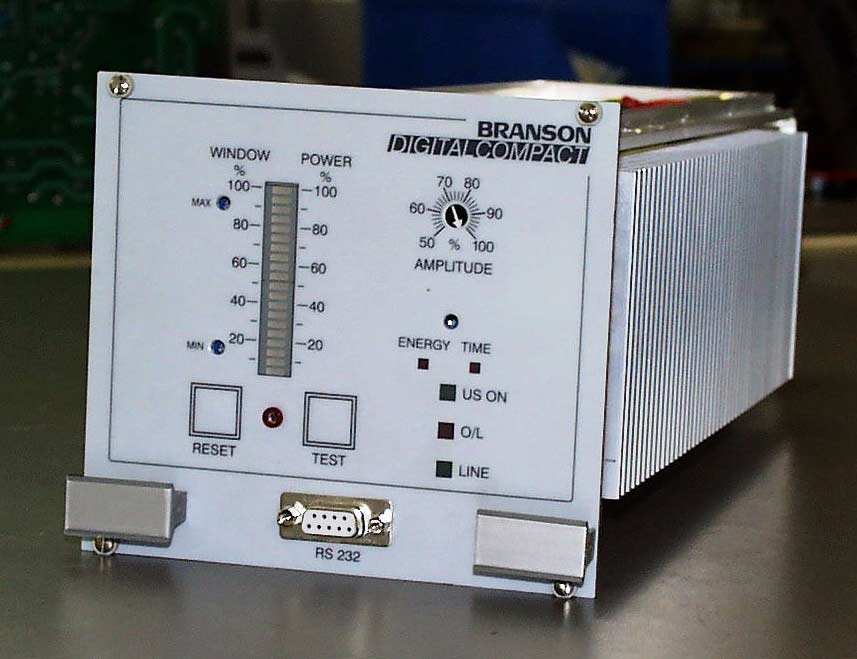 An Ultrasound Generator converts the mains 50-60 Hz alternating current into
a Source of High Frequency Power Supply, used in Barred Blanket conversion
Usual Frequencies fall within the 20 to 40 kHz range 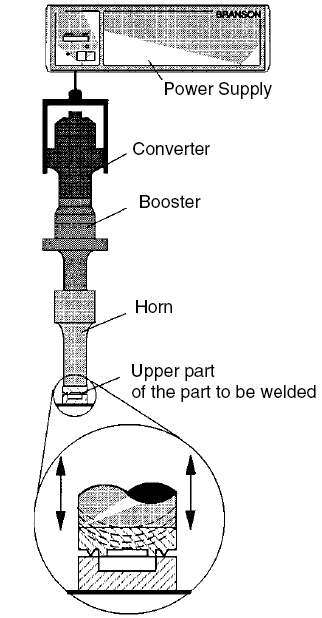 Glue-Activation-Press Control Panel enables the use of the best heat cycle and duration.
It does also register total and still missing number of activation cycles for Quality Assurance purposes.

Pretensioning implies Distortion – They are just Cause and Consequence, inherent to blanket’s carcass fabrics concept behind its production. 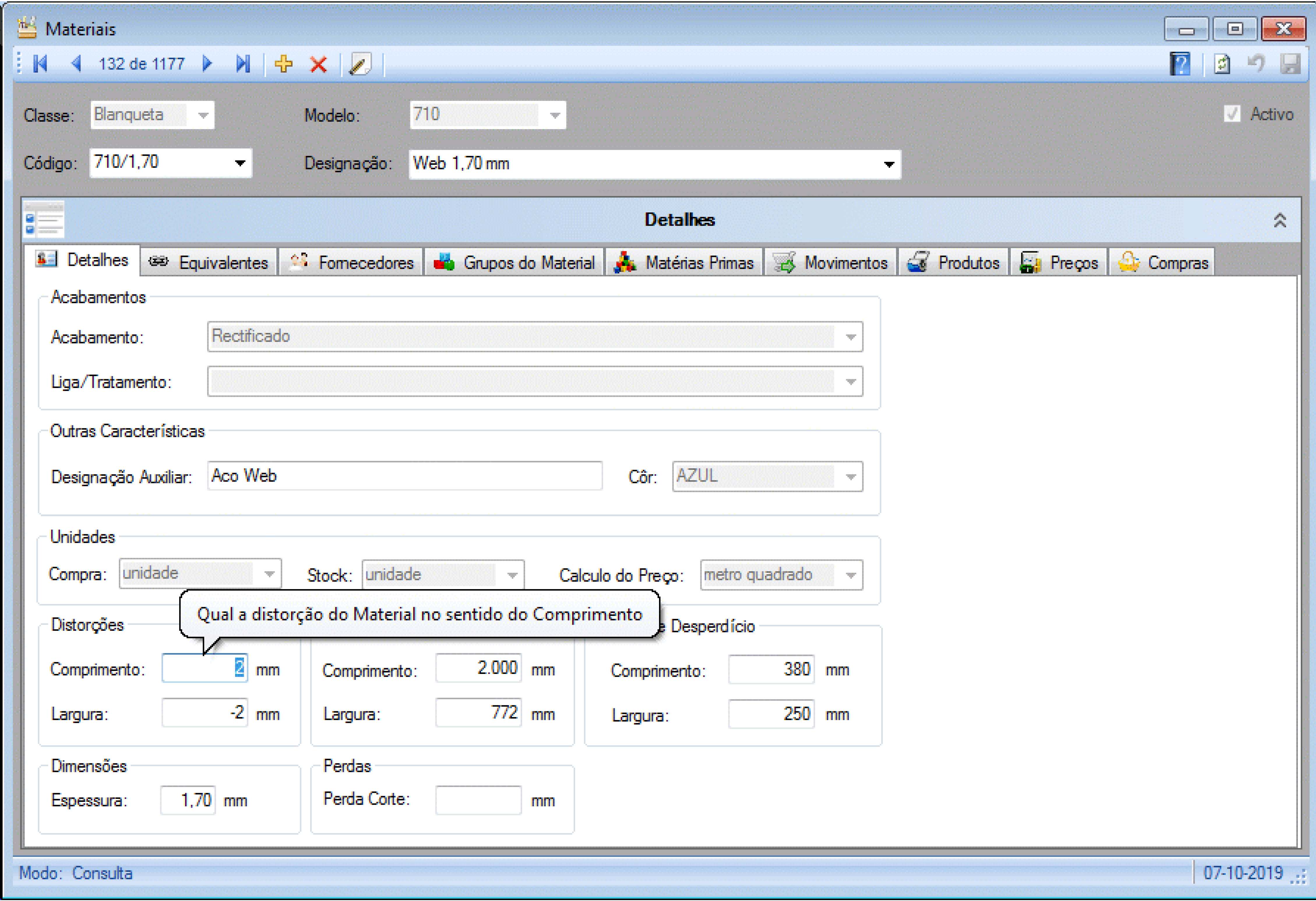 Distortions in the Around and Across directions will necessarily be different.
It is possible to minimize internal tension effects, generated by the warp thread length equalization operation taking place during cloth manufacture stage. 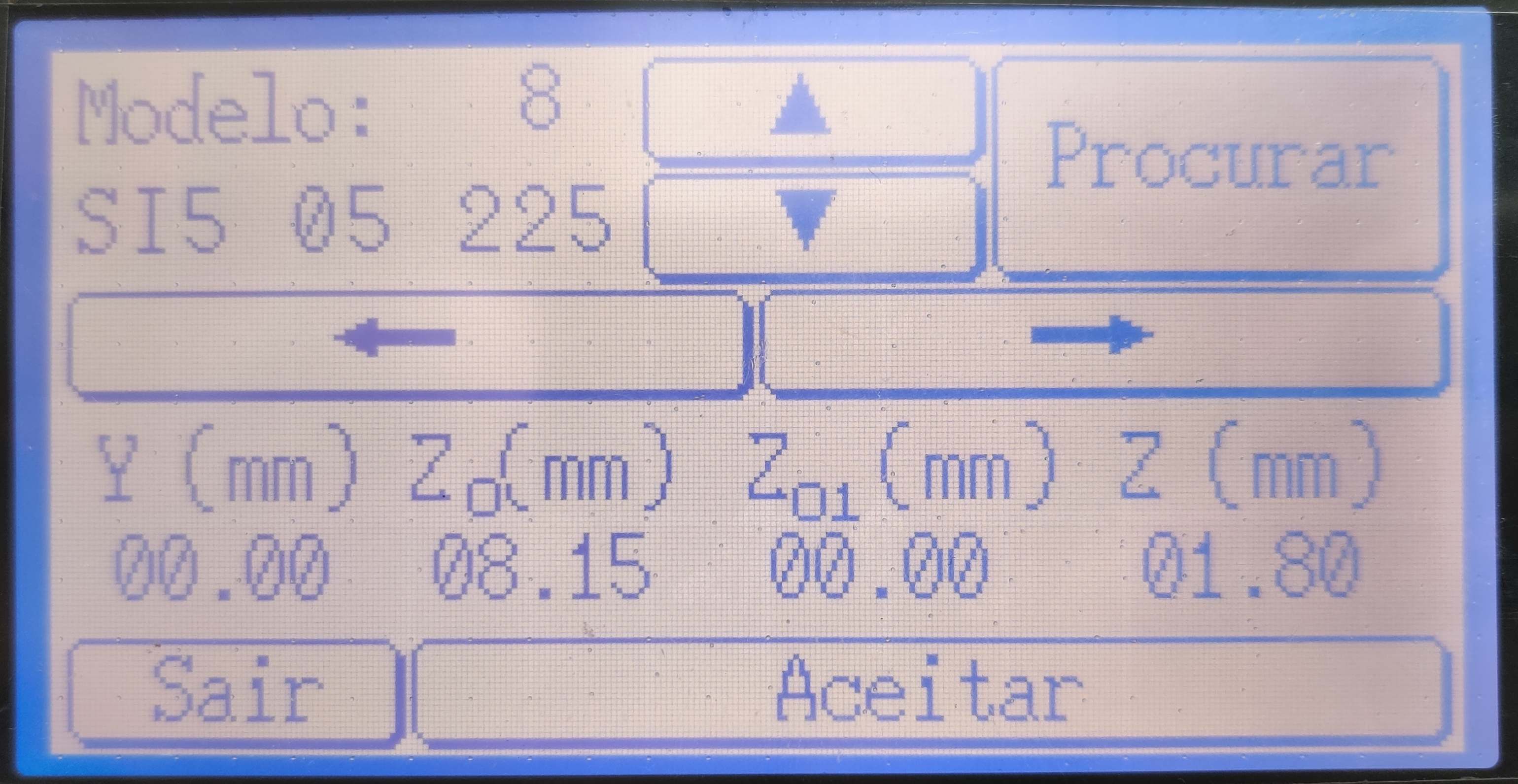 Personalisation – Custom executions – Each customer has its particular needs. 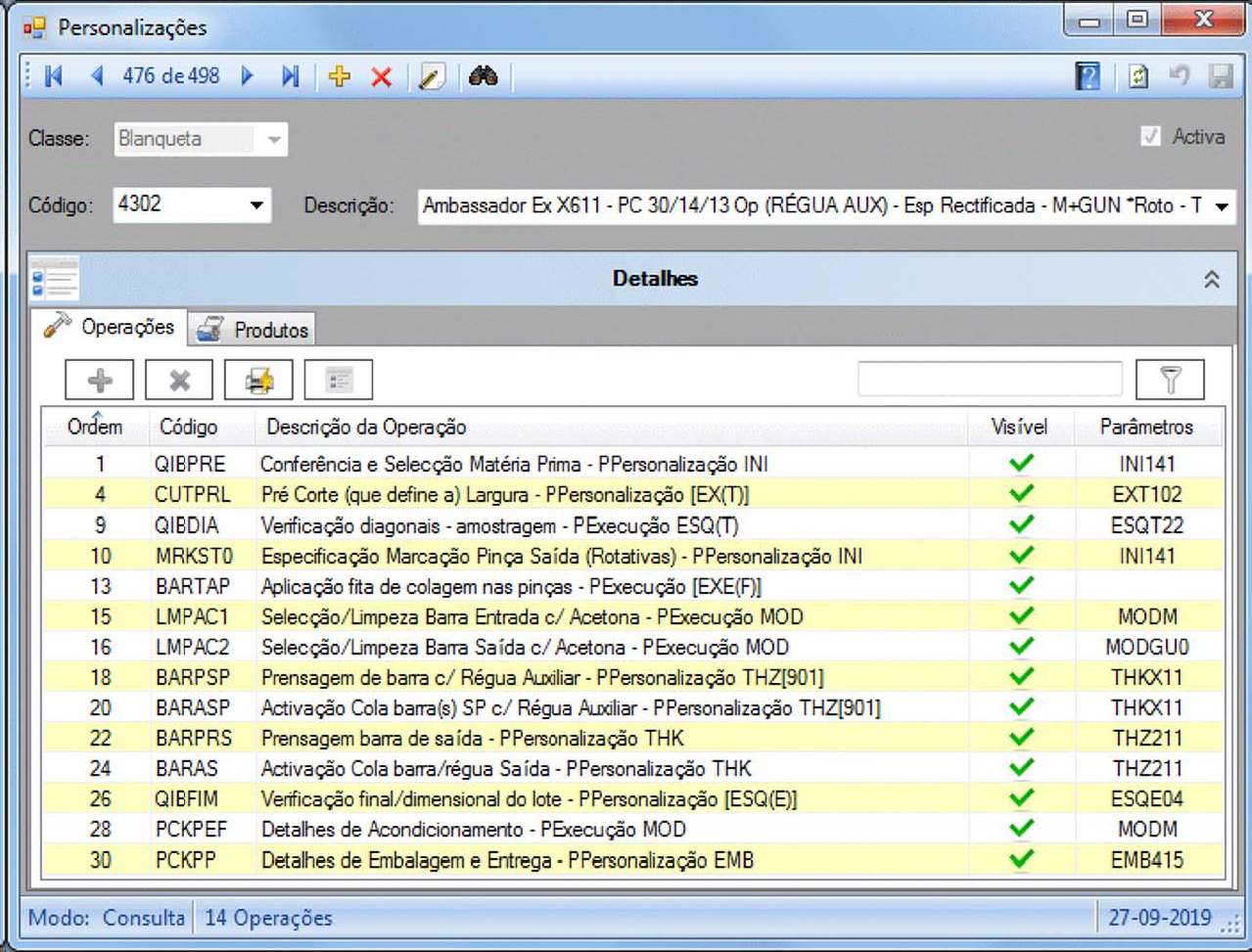 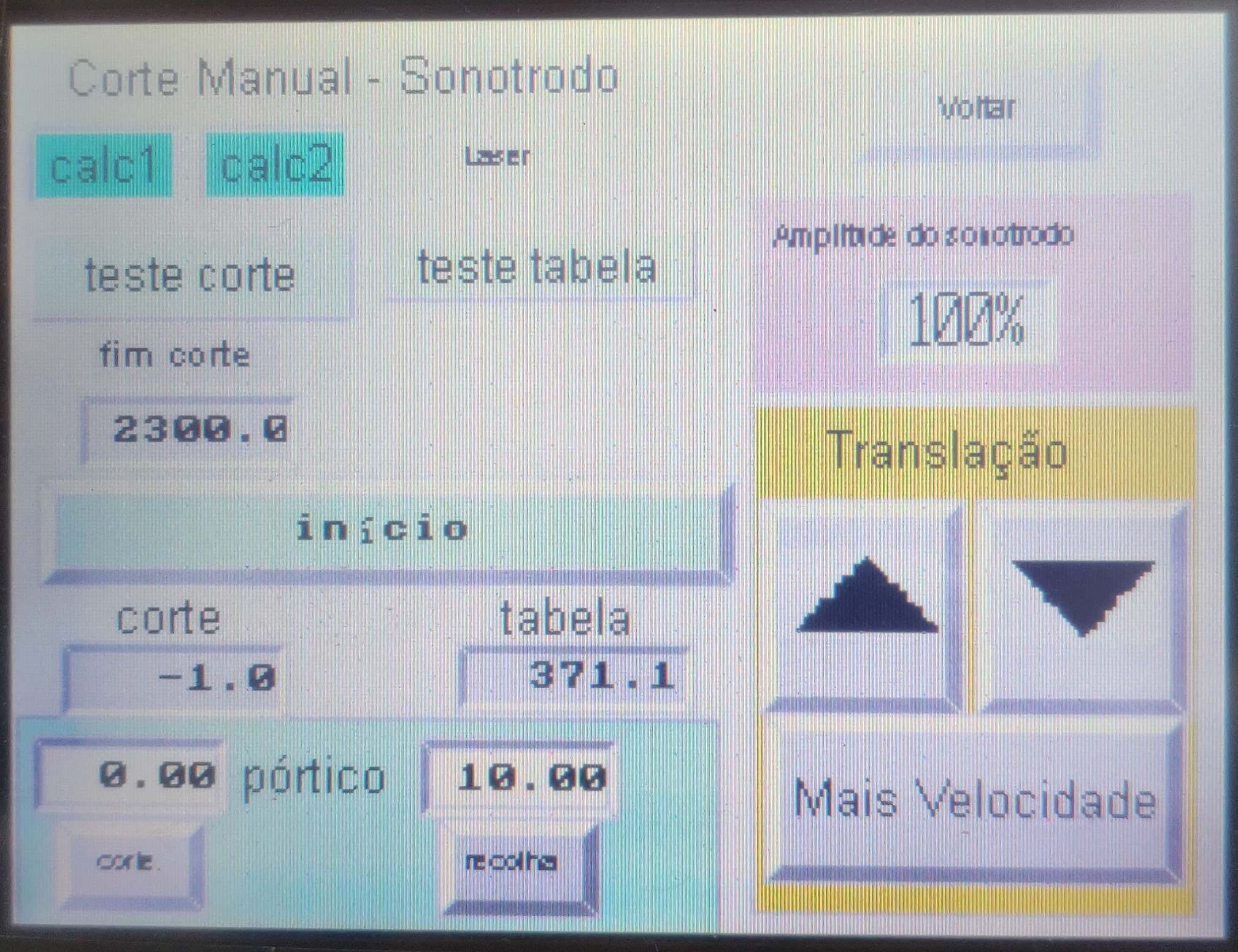 Blanket Cross-Section and Surface Texture give an initial assessment of its response consistency. 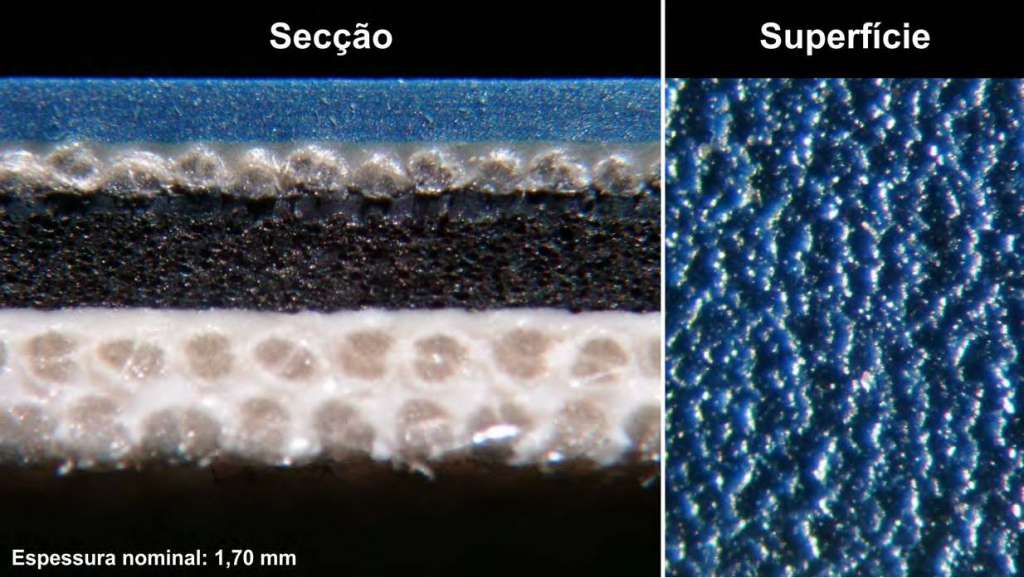 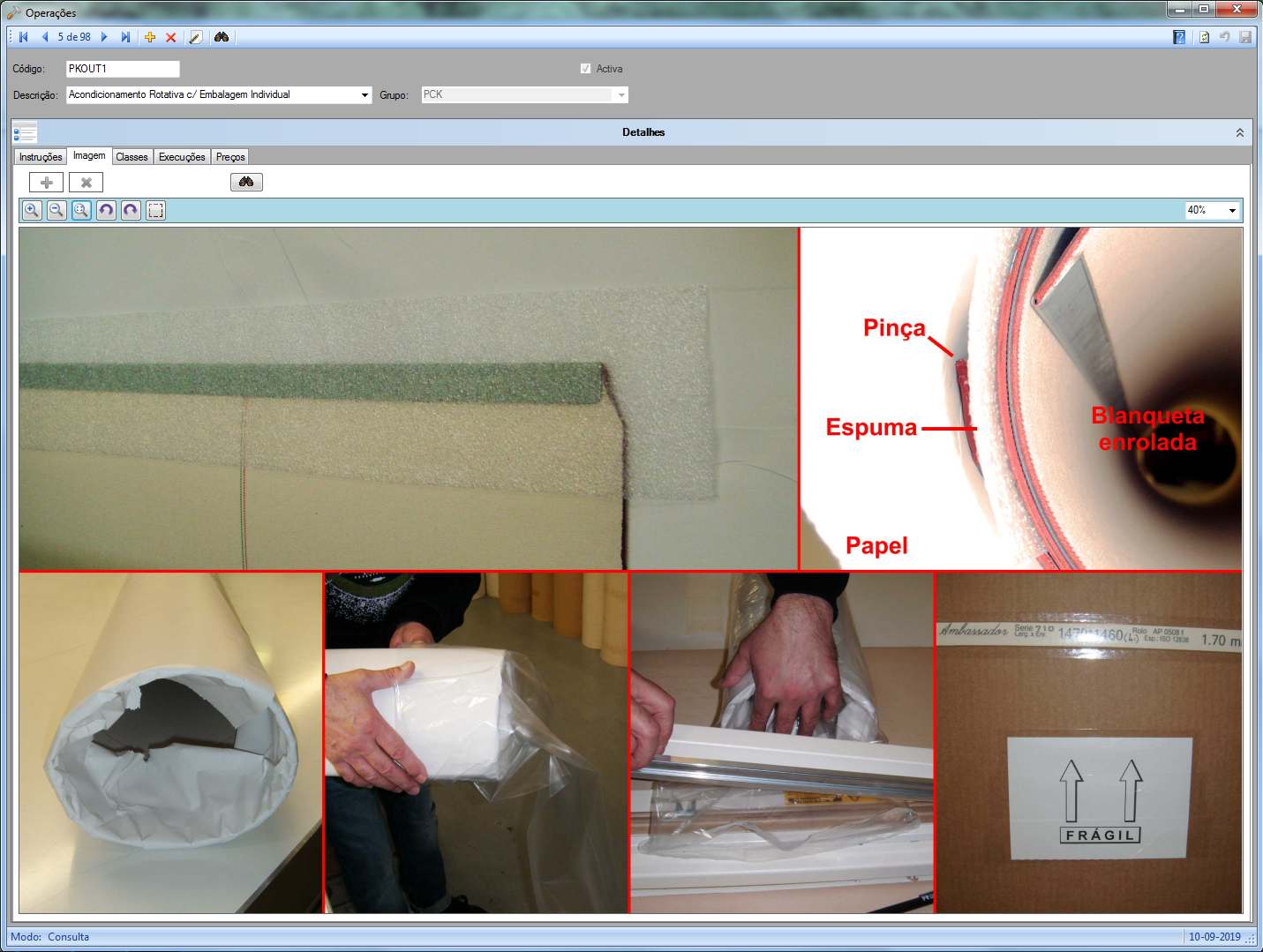 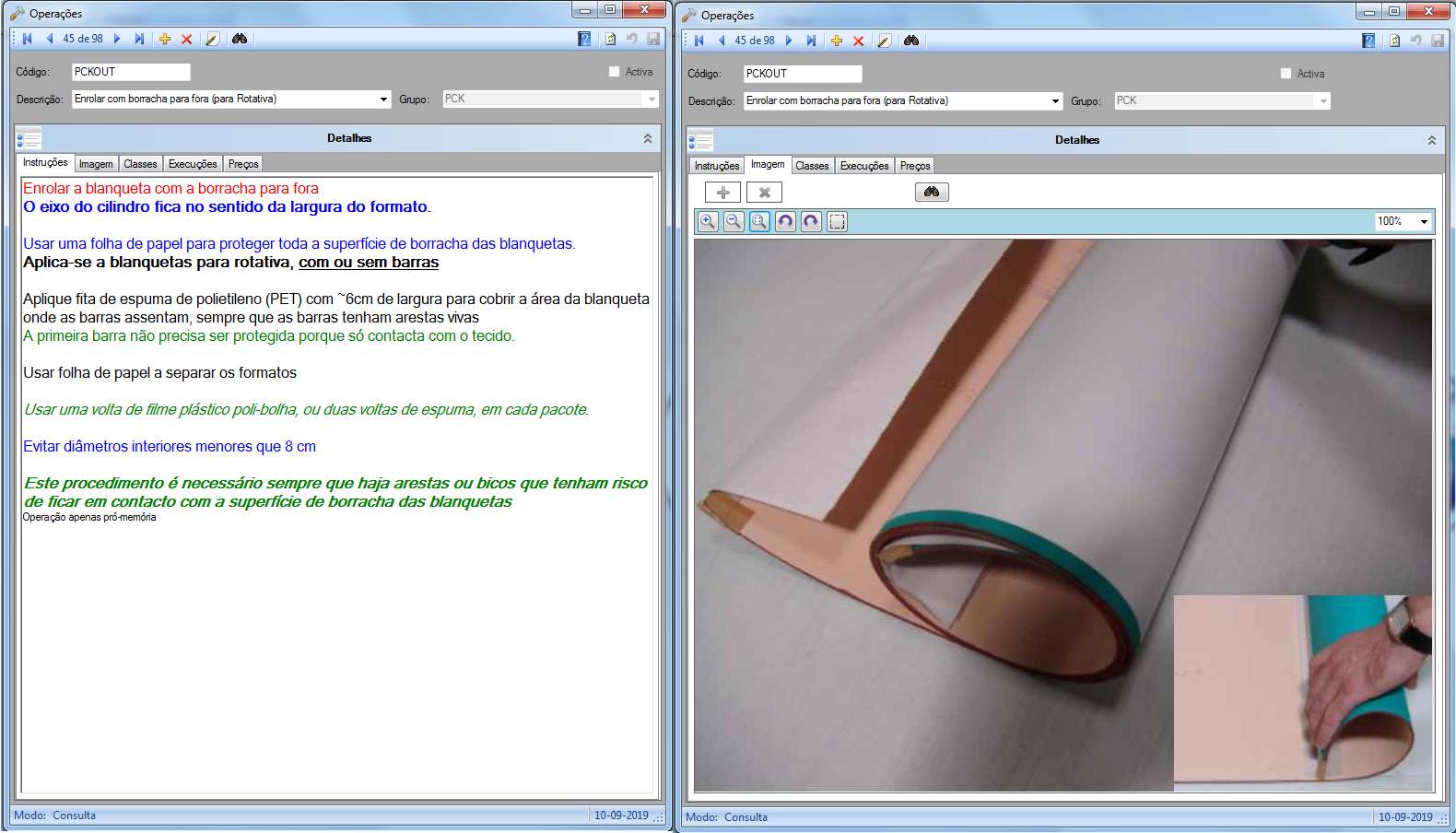 For WEB applications rubber surface faces outwards, duly protected by paper.
Whenever the bars have sharp edges, these must be protected by plastic foam tape.

Effective Silane use transfers the mechanical stresses applied to the laminate bulk to its fibreglass reinforcement. 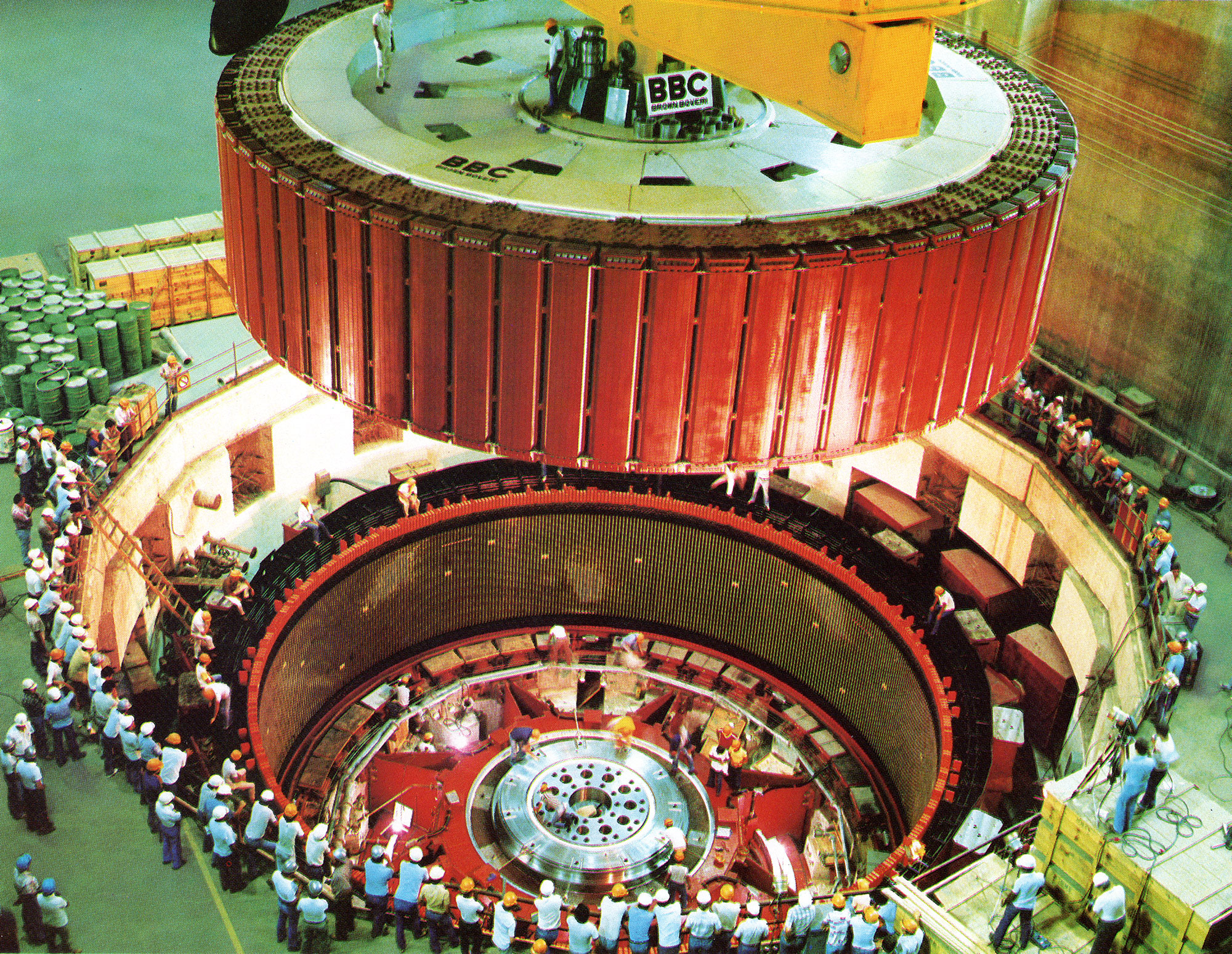